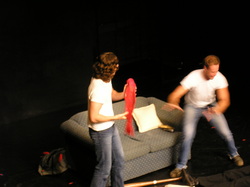 Carp Are Smart Fish
​
It’s nearly BOOM time. When Ringo and Dooby discover a carp fish reciting the book of Revelation it seems that the Apocalypse is on the way. All they have is a baseball bat, a bible and a lunatic priest to save them from Armageddon.

Featured at Short and Sweet Festival (Sydney, 2005), Short and Sweet (Melbourne, 2005).
Cable Car of Death
​
Ollie, Floyd and Kat are dangling in a cable car above the Swiss Alps and the second last cable just broke. All they have is hair clips, chewing gum, dental floss, and the mobile phone number of the great Harry Houdini.

Featured at Short and Sweet (Melbourne, 2008) and Short and Sweet (Sydney, 2009), Ballarat Grammar (Ballarat, 2008), MAYTE Youth Theatre (Ballarat, 2010 and 2011).
Stunt Cat
​
Lagara, the famous cat who in 1901 survived a trip over Niagara Falls is trapped in bubble wrap on the coffee table. She is over one hundred years old and indestructible…the bloody cat is in perfect nick.

Featured at Carnival of the Damned Funny (Melbourne, 2008).
A Drop Would be Something
​
There is water out there. She knows she can find it. If he just let her try again. It’s down in the back paddock where no one’s allowed. She was a mother once, she still remembers.

Featured at Melborn Short Play Festival (Melbourne, 2007).
Bloodletters
​
Rabbit and the Doctor are draining Martin’s blood… to either kill him or to watch him live.

Featured at Box a Shorts (Melbourne, 2007).
​About Love and Words
​
Billy has been writing. He’s won the big poetry prize. But Evie couldn’t keep singing about love and words. Stone doesn’t wait, it shuts down.

Featured at SOACT Festival (Wagga Wagga, 2009).
​The Masked Booby
​
Rip, the human cannonball, aka 'The Masked Booby', is blind, drunk and about to tell his manager, Sam, the truth before completing his final flight.